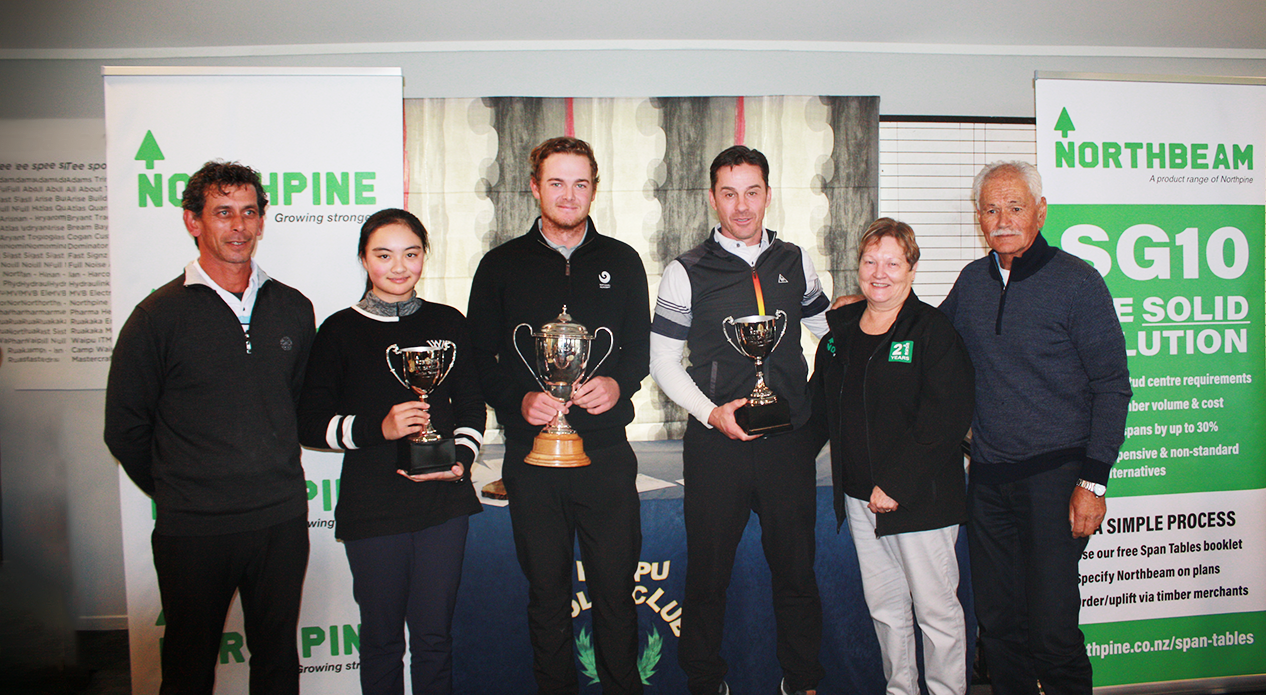 After a year off courtesy of Covid, 2021 saw the 54-hole Northpine Bream Bay Classic return to Waipu Golf Club’s picturesque links course over the weekend of 10-11 July – but stormy weather got in the way, reducing the tourney to 36 holes, with only 9 holes possible on Sunday. Defending Mens Open champion Tyler Wood (Ngahinepouri) won comfortably, shooting sub-par rounds of 67 and 69 (136) to win by 8 shots.

Amy Han (Titirangi) won the Ladies Open with consecutive rounds of 78 (156), while in the Masters division Dell Bain (Tara Iti)’s consistency in firing 145 (72,73) was just enough to fend off both Paul Allen and Nathan Jacoby by a single stroke.

Northpine is Principal Sponsor of Takahiwai RLC, whose senior mens side are competing in Auckland’s premier club competition from May through September – a long, hard season with weekly travel and no games at ‘Taka’s’ home ground – except for 10 July, when Waiheke Rams graciously agreed to trek all the way north, and received a typically friendly Takahiwai welcome. Result: Northpine Takahiwai Warriors 28, Waiheke Rams 12. The Warriors are looming as serious contenders for the Ray Cranch Cup in their debut season footing it with the Aucklanders. Go Taka!

The season is over too soon for Northpine Waipu RSC’s Premier and Premier Reserve sides, with neither team making the playoffs. Northpine is Principal Sponsor of the club, whose championship-winning Premiers in 2019 and 2020 were looking for a ‘three-peat’ but failed to make the playoffs after a season dogged by a massive number of injuries. The Reserves narrowly missed the finals, finishing mid-table. Junior rugby continues weekly through late August though, and Northpine Waipu remains a strong and enthusiastic Club in all respects. Roll on 2022 !

Northpine Waipu Cup raceday at Ruakaka is a feature of the annual Winter in Waipu festival through July. A throng of racegoers enjoyed the galloping action, fun and festivity as Bream Bay celebrates its proud Scottish heritage. Six-year-old Australian-bred gelding Acutus led from end to end to win the feature race, the $32,500 Northpine Waipu Cup in the hands of female apprentice Eilish McCall. Northpine and co-sponsors Lonza and White Cliffs Timber hosted about 60 guests for luncheon, refreshments, fun and games in the comfort of the Bonecrusher Room overlooking the home straight.